The Japanese Chin is also known by the names: Chin, Japanese Spaniel.

The Japanese Chin (also known as the Japanese Spaniel) is an old breed which has existed for at least 1000 years, possibly much longer, and its distant ancestor is believed to be the Tibetan Spaniel. Despite its name the Chin originated in China where it was greatly prized for its beauty and where it was accorded high status in the Imperial palaces of the emperors. It is believed that it was as a gift from the ruler of China to his counterpart in Japan that the Chin arrived in that country. Japanese royalty fell under the spell of this dainty diminutive dog and it swiftly became a favourite of the Imperial household where it was honoured, pampered and closely guarded. Chin arrived in the West in the 1860s via Commodore Perry who was presented with some as ceremonial gifts. He, in turn, presented a pair to Queen Alexandra who successfully bred and showed them and thus popularized the breed in Britain. There is a suggestion that the original Chin were somewhat larger than those of today and that crosses with King Charles Spaniels were undertaken to reduce size. This exquisite little dog was first recognized by the Kennel Club in 1894.

Bred solely as a companion dog the gentle, stylish Japanese Chin fulfils this role to perfection. He is extremely loyal and devoted to his people and his greatest pleasure is to be in their company as much as possible. He is very sensitive and responsive to emotions and atmosphere. If his owner is happy he is happy and will exhibit the merry, playful side of his character. If there is sadness he will quietly curl up close by and comfort with his presence. He does have a slightly independent streak and can be quite determined in the effort to get his own way. It is therefore important that he should be gently made aware of the house rules and that he is not lord of all he surveys. You must also harden your heart to the “you surely don’t mean it” look of astonishment and disbelief which is so distinctive to the breed . The Japanese Chin is renowned for his cat-like qualities. He uses his front paws to bat and scoop objects, he attempts to keep himself fastidiously clean (often using his paws to wash his face), and he will climb like a cat to repose with feline grace on the padded backs of furniture or on window ledges. He can be reserved with strangers and, although he is a quiet dog, he is very alert and will bark to announce the arrival of visitors. He is more robust than his slight build would suggest but he can be overwhelmed and accidentally injured by small children so is better suited to individuals or families with older children who can understand how to handle him. For those seeking a small, bright, even-tempered dog who will give a lifetime of unconditional love the Japanese Chin is very worthy of consideration.

Given a person or another dog with whom to interact the Chin will play boisterously and tirelessly. This playing in home and garden will supply most of his physical exercise requirements. However, he should also have a short daily walk as this will provide interest and stimulation for his clever brain. It is important that care is taken not to over-exercise him during hot weather as he may experience breathing difficulties and hyperthermia due to his short muzzle and his consequent inefficiency in cooling the air he breathes.

Basic obedience training should be commenced as early as possible in order that the Chin should become an agreeable companion (rather than a miniature despot), and that he should be a pleasant addition to society in general. He is a very intelligent dog and, being willing to please a loved and respected owner, should not present difficulties in training. Sessions should be kept short and made interesting and fun for him. Positive methods using food treats and praise will bring out the best in him. Harsh verbal or physical discipline should never be used. Japanese Chin have proved themselves capable of succeeding at high levels of competitive obedience. Socialization should also be started early in the pup’s life. By introducing him to a variety of people, other dogs, sounds, sights and situations he will develop into a calm, confident, outgoing, adult.

Some photographs of the Japanese Chin... 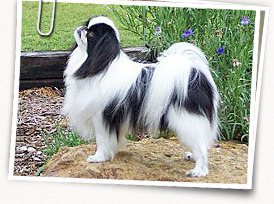 Black and white, or red (includes shades of sable, lemon or orange) and white

If you have any suggestions or if you think you’ve spotted an error, please let us know in our Japanese Chin forum.