The Maltese is a breed so old that its exact origin is lost in time. Theories are that it was carried to Malta from Egypt by Phoenician traders or that it arrived there from Asia via the Middle East with nomadic peoples. While the truth may never be known the breed has been inextricably linked with the island of Malta for many hundreds of years. The antiquity of the breed is attested to by likenesses on artefacts nearly 3000 years old and Charles Darwin believed the Maltese to have existed in 6000 BC. These small dogs found favour in the imperial courts of ancient Greece and Rome and were celebrated in poetry in the first century AD. Over the years they have appeared in many paintings, including works by Titian, Goya, Landseer, and Reynolds. It is believed that early interbreeding with small spaniels and poodles may have taken place in Italy but it would seem that the breed has remained relatively pure owing to the comparative isolation of Malta and the consequent lack of outside influences. The breed may have arrived in Britain in the 14th century with returning Crusaders; it was certainly known in the 16th century as both Mary Queen of Scots and Elizabeth I are supposed to have owned Maltese. The breed was first shown in the UK in the 1860s.

“... coat of long hair, whiter than ermine, ... movements exquisitely graceful and matchless elegance of appearance”. These words written by Ludovico Ariosto in 1516 describe perfectly the Maltese we know today. However, his sheer beauty of form is but one of the many attributes of the Maltese. He is a lively, intelligent, loving and lovable dog whose true delight in life is to be with his owners and to be regarded as a real part of the family. Trips in the car, walks, gardening, games, relaxing in front of the fire or on a convenient lap - he just wants and needs to be where you are and will join in any activities with enthusiasm and a great sense of fun. For sensible children he is a good friend and playmate but depite his gentle nature and sweet temperament he may be impatient of, or overwhelmed by, rough handling and loud, shrill voices. He is a good and brave watchdog who will quickly and loudly announce the presence of approaching strangers. His dainty appearance and air of refinement can be rather misleading. He is actually very strong and hardy and will enjoy romping around getting grubby and collecting debris in his coat as much as any other dog. And as with any other dog it is important not to over-protect and pamper him otherwise he will become too self-important and may exhibit resentment should attention be directed on anything or anyone other than himself. His devotion, merry nature and joyful heart are evident even well into old age and through all his years he will prove to be a most delightful companion “more precious than Indian gems” (‘On the Maltese bitch Issa’: Martial, b. 40AD).

Being an active little dog the Maltese will get much of his necessary physical exercise by busying himself around his domain and play sessions in the house and garden. He does however enjoy getting out and about and will be very pleased to accompany his owner on short or long walks, whatever the weather may be. Daily walks will provide him with interesting sights and smells to stimulate his mind and prevent him from becoming bored. Being nimble and clever he can do well in the canine sport of agility and is a good candidate for obedience competition, both of which will present the opportunity for mental and physical exercise.

The Maltese is an intelligent dog, quick to learn and willing to please a loved and respected owner and, as with all dogs, he needs to be gently but firmly guided in what is, and what is not, acceptable behaviour. He will be much happier if he knows his boundaries. Basic obedience training should be commenced as soon as possible using encouragement and rewards of praise and treats for compliance with commands. Harsh words and manhandling are unnecessary and will have negative effects on the sensitive Maltese. Keeping training sessions, short and fun, and employing patience, kindness and consistency will bring out the best in him. Socialization should also be started at the earliest possible time. By introducing the pup to the various kinds of people, places, situations, etc. that he may be expected to encounter during his life he will be provided with the skills required to cope in the human world. The well-trained, well socialized Maltese is a joy to live with and a pleasure to meet.

Some photographs of the Maltese... 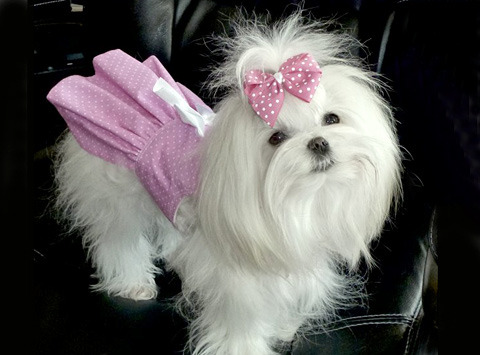 Anabelle is a treasured pet. 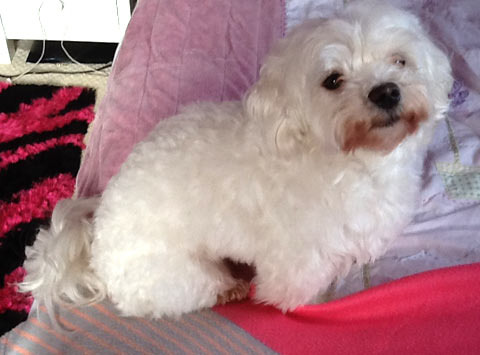 Ziggie, owned by Victoria in UK

This is my beautiful boy ziggie.

White, may have slight lemon markings

If you have any suggestions or if you think you’ve spotted an error, please let us know in our Maltese forum.