The Papillon (also known as the Continental Toy Spaniel) probably evolved in Spain and Italy, its progenitors being small Spaniels. However it is France and Belgium which are acknowledged as responsible for developing and perfecting the breed. The history of the Papillon can be followed through its depiction in many important works of art starting in the 15th century. Numerous portraits and group paintings by artists such as Titian, Rubens, Van Dyke, Rembrandt, Fragonard, etc. reveal the dainty Papillon as an obviously valued and cherished companion and an integral part of the family. A great favourite among the aristocracy and the royalty of Europe the Papillon is associated with Queen Marie Antoinette, Queen Charlotte, Queen Anne of Austria, Queen Sophia Dorothea and many other royal and noble ladies. The popularity of the breed did not extend to Britain until the beginning of the 20th century and it was not recognized by the Kennel Club until 1924. The word Papillon translates from the French as butterfly, a reference to the heavily fringed, erect ears which are reminiscent of butterfly wings. There is also a drop-eared variety known as the Phalene (moth).

A thing of beauty and a joy forever. This old saying can be very applicable to the Papillon. He is indeed extremely beautiful and, if commonsense rules are applied, he will forever be a joy to live with. Just because he is tiny and fine-boned does not make him any less of a dog than is a St Bernard. From the outset he should gently but firmly be made aware of his role in the household and the boundaries of acceptable behaviour. Lacking this guidance, and if over-indulged and coddled, he may become very possessive of his owners and jealous of their attention. His contentment lies in knowing he has a strong and trustworthy leader and in being granted lots of companionship and a place in the home and hearts of all family members. The exquisite Papillon is a happy, extroverted fellow who is rather hardier than his delicate appearance might suggest. However, while he is playful and can be both gentle and patient, this breed is not suited for families with young children as clumsy handling and vigorous play may lead to injury, especially in the case of puppies which are very fragile. He is a sociable dog and is generally good with other dogs and accepting of attention from everyone he meets. At home he will prove himself a good watchdog and will sound the alarm at any untoward occurrence or at the approach of strangers to his territory. If sensibly trained and handled the charming Papillon is an excellent and affectionate companion who will repay your love and care with a lifetime of unconditional devotion and loyalty.

The Papillon is an energetic dog but, being small, much of his physical exercise requirements can be met by active games around the house and garden. However, he does enjoy the outdoors and is always eager to get out and about whatever the weather. A daily walk is therefore recommended to provide mental stimulation and the opportunity to socialize. Being nimble and smart he can do very well in the canine sport of agility.

Basic obedience training should be commenced with the puppy as soon as possible. The Papillon is a highly intelligent dog who learns quickly and is keen to please. All training should be based on positive methods which reward wanted behaviours with treats and praise. Harsh physical or verbal corrections should never be used as such methods will frighten and confuse him thus eroding the bonds of trust, respect and affection which are the cornerstones of successful training. Papillons trained with gentle firmness, patience and consistency have distinguished themselves at the highest levels of competition obedience. Socialization should also start in early puppyhood. By introducing the pup to various people, animals, sights, noises and situations the foundations are laid for a friendly, confident, well-mannered and level-headed adult.

Some photographs of the Papillon... 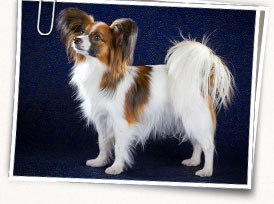 White with patches of any colour except liver. Tricolour: black and white with tan spots

If you have any suggestions or if you think you’ve spotted an error, please let us know in our Papillon forum.