As indicated by its name the Pekingese originated in China where diminutive breeds have existed and have been treasured for at least 1500 years. So far is as known the earliest records of the Pekingese date to the 8th century Tang Dynasty and describe a dog clearly established in type, which must mean that the Pekingese existed as a distinct breed well before that date. For centuries Pekingese were the precious and venerated familiars of the Chinese imperial families. Cosseted, guarded, pampered, theirs was a life of luxury and privilege and theft of a Pekingese was punishable by death. There is a charming legend which explains how the Pekingese came to be known as the Lion Dog. A lion became enamoured of a sweet and graceful marmoset and begged Ah Chu, patron saint of animals, to reduce him in size in order that he might court her but also to allow him to retain his fearless heart and noble character. From their union was born the Lion Dog, the Pekingese - courageous but serene, dignified but captivating, proud but playful. It was not until 1860 that the Pekingese arrived in the West following the sacking of the Imperial Palace in Peking by British and American soldiers who found five surviving dogs, one of which was presented to Queen Victoria whose approbation contributed greatly to the popularity of the breed. Pekingese were first shown in the UK in 1893 and were first registered with the Kennel Club in 1898.

Despite his air of regal dignity and self-importance the Pekingese is an exuberant and fun-loving fellow who can get up to the same mischief and frivolities as any other dog. He is very loyal to his owners and likes nothing more than being with his people. However, he is not exclusively a lap dog. He enjoys a cuddle but has an independent nature and is rarely fawning or overly demanding of attention. It is important that from the start he is taught the rules of the household and the boundaries of acceptable behaviour otherwise his natural self-esteem and wilfulness may result in him ruling the roost and running your life. This is a dog whose spirit and courage bear no relationship to his size. He generally gets on well with other dogs, but if challenged he will respond and defend himself fearlessly, quite undaunted by even the largest and fiercest of opponents. He is not shy or aggressive with strangers but may be rather aloof, subjecting them to his inscrutable regard whilst deciding whether to graciously accept their admiration and allow himself to be petted. As a watchdog he is very effective and will sound the alarm at any disturbance. Caution must be taken that his strong instinct to protect his territory and his loved ones does not develop into over-possessiveness which may, in turn, lead to aggressiveness. He is not an ideal playmate for young children as he can be intolerant of clumsy handling, teasing, and rough games. The Peke is deservedly one of the more popular of the Toy breeds and is a delightful and endearing companion for individuals or families with older, considerate children.

Although he relishes the warmth and comfort of the home the Pekingese also enjoys getting out and about. His build (short but surprisingly heavy) makes him unsuited to long hikes or running far but a short daily walk will keep him physically fit and provide him with mental stimulation. Being a brachycephalic breed and having a thick, abundant coat he can easily become overheated so exercise during the hottest parts of the day should be avoided.

Basic obedience training is necessary to ensure that the Peke should be a pleasure to live with and a welcome addition to the general community. Most authorities agree that stubbornness is a basic characteristic of the breed and that if a Peke does not want to do something then he won’t, and that’s that as far as he is concerned. However, he is a highly intelligent dog and likes to please his loved and respected owner and while training may present some challenges the application of patience, benign firmness, and consistency will accomplish much. Sessions should be short and made as interesting and as much fun as possible. Good efforts should be encouraged and rewarded with treats and enthusiastic praise. Rough handling or harsh verbal corrections are unnecessary and will prove counter-productive. Socialization should commence as soon as possible. The young pup that is introduced to, and becomes accustomed to, various types of people, other animals, noises, places, sights, etc. will develop into a well mannered, sensible adult who is an excellent ambassador for his breed.

Some photographs of the Pekingese... 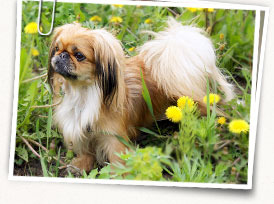 All colours and markings allowed, except albino or liver

If you have any suggestions or if you think you’ve spotted an error, please let us know in our Pekingese forum.