Most authorities are in agreement that the Pug originated in China some 2,500 years ago. This supposition is supported by the evidence of ancient Chinese artefacts which depict small dogs which differ very little from todays Pug. Some suggest that the ancestors of the Pug were Eastern Mastiffs which were bred down in size but, while the Pug does display some external characteristics which may resemble those of a Mastiff, there are no records to confirm this. Pugs made their way to the West in the 1500s via Dutch sailing ships which plied the trade routes to and from the Far East and the unique-looking little dogs quickly found favour with the Dutch Royal family. When William of Orange ascended the British throne in 1688 he brought his Pugs with him. Their popularity increased throughout Europe reaching its height in Britain during the Victorian era. Once in great demand in society circles as an essential accessory of the fashionable the Pug is now owned and loved for himself by people of all ages from all walks of life, and deservedly is one of the most popular of the Toy breeds.

The Pug is a truly delightful dog who can light up a room, and the lives of his owners, with his sparkling personality. Despite his air of dignity he has a definite sense of humour and can be as frivolous and mischievous as the next dog. His people are his life so he needs a lot of company and to know that his assumption that he is an integral part of the family is correct. If excluded from the family circle he will be miserable and will fail to thrive. He must always be an indoor dog, both for his physical and mental comfort. Tough and independent he does not need pampering, but he does need to be educated in the rules of the household and the boundaries of acceptable behaviour. Given a few commonsense guidelines he will be easy to live with even though he can be somewhat opinionated and stubborn. It is necessary to make sure that he does not become overweight - easier said than done sometimes when confronted with that irresistibly quizzical face and those heart-melting eyes which try to convince you that he is on the brink of starvation. He is generally a good playfellow for sensible children as he is tolerant and quite robust and will enter into games with enthusiasm. It must be taken into consideration that his prominent eyes are vulnerable to damage so care must be taken with play and any other activity which may cause eye trauma. He will bark to alert to strangers approaching but he is a sociable fellow and, once having done his duty, he will go forward with a friendly welcome. For those that want a compact, sturdy dog with a big and constant heart the loyal and vibrant Pug is a fine choice of companion.

Only a moderate amount of exercise is required to keep the Pug physically fit but, although he is a naturally energetic fellow, he can be lazy so it is important to ensure that he does have at least one daily walk to help keep him trim. Walks will also satisfy his love of getting out and about and will keep his mind active and stimulated. He will be delighted to have the opportunity to run around off-lead but this should be done in a secure area as he is innocent of the danger of roads and other hazards. Being a brachycephalic breed great care must be taken to exercise only in the cool part of the day as he is extremely sensitive to heat and humidity.

It is not possible for a dog to fulfil his potential as a pleasant companion, or for him to cope with our world, if he does not know what is expected of him. Basic obedience training should be started as soon as possible. The Pug is a highly intelligent dog and loves his food. This combination will make training easy and enjoyable for both dog and owner. He is also willing to please a loved and respected owner. So, when training use only positive methods, i.e. reward good behaviour and good responses with treats and praise. Harsh handling and strong verbal corrections will achieve very little other than fear, confusion, and perhaps a resolute refusal to work. Once a rapport has been achieved the sky is the limit with many Pugs succeeding at the highest levels of competition obedience. Socialization should also be commenced in early puppyhood. By introducing him to novel situations, various people, sights, sounds, other dogs, animals, etc. the pup will grow to be a confident, light-hearted, friendly and sensible adult who is welcome wherever he goes.

Some photographs of the Pug... 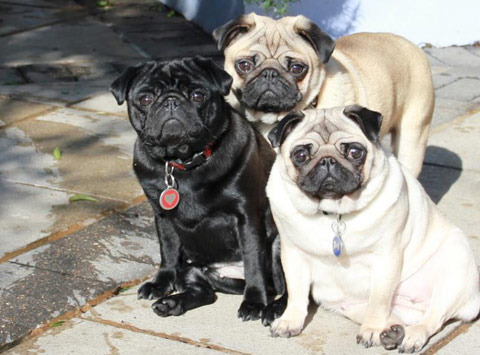 Phoenix, Teddy and Tucson, owned by Shirley in Romford, UK

Phoenix is the black female, she is the athlete of the three, does everything at high speed, jumps very high for a little one and is a complete dare devil. Teddy (standing at the back) is a light apricot male, he's a proper boy, loves to rough and tumble, easy going and without a care in the world. Tucson is the light fawn female on the right, she has a huge personality and likes to be boss. She takes no nonsense and tells the other two off quite a lot. For more info and photos, see Phoenix, Teddy and Tucson's thread in our forum.

If you have any suggestions or if you think you’ve spotted an error, please let us know in our Pug forum.