The Shih Tzu (pronounced shid-zoo or sheed-zoo) is believed to have been developed in southern China. Views on the exact origin of the breed differ, but the most widely held are that they were produced by crossing the ancestors of todays Pekinese with the Tibetan Lhasa Apso, the latter being gifts from the Dalai Lama to esteemed visiting dignitaries from China. During the Manchu dynasty the Shih Tzu (lion dogs) were the royal dogs of the imperial household and they were the particular favourites of the Dowager Empress Tzu Hsi. Tzu Hsis kennel of Shih Tzu, Pugs and Pekinese were famous worldwide but after her death in the first decade of the 20th century these kennels were dispersed and her breeding programme abandoned. Following the rise to power of the Communist regime thousands of dogs were destroyed and it is believed that the Shih Tzu became extinct in its homeland. Every Shih Tzu today can be traced back to the very small gene pool of thirteen dogs which found their way to Europe plus one Pekinese who was used in a cross in England in 1952. The Shih Tzu was recognized by the Kennel Club in 1946.

The Shih Tzu is a friendly, easy-going and affectionate dog who makes a delightful family companion for those who want a small dog full of personality and who can commit to daily grooming of his luxuriant coat. He is very much a people dog revelling in attention, desiring always to be in proximity to his owners and very sensitive to moods. If he is deprived of contact and human interaction his loneliness and unhappiness are likely to be expressed by destructive behaviour. Despite his size he is not a fragile toy. Rather, he is quite strong and sturdy and delights in playing and romping around. He can be a rather self-assured dog with an independent nature and a strong sense of his own importance. It is therefore important that owners should not give in to the temptation to spoil him but should firmly establish themselves as the leader if the Shih Tzu is not to become a tyrant in the home. He is courageous and his watchdog qualities are excellent. He will alert to approaching strangers with a surprisingly deep bark but his sociable nature means that he is highly unlikely to be aggressive. He is generally very good with children if there is mutual respect but the breed is not recommended for household with children under five years as there may be some jealousy, an intolerance for any mis-handling, and he can easily be overwhelmed by toddlers.

The Shih Tzu will be as active as you wish him to be. He can obtain most of his exercise around the house and garden but can cope with, and will enjoy, quite a lot of exercise. A brisk daily walk will present interesting sights and new smells to keep his mind stimulated and will also help keep him trim. He will enter in to playing games with an infectious enthusiasm and will be happy to have the opportunity for a little free running and exploration in a secure area. It is not unknown for Shih Tzu to compete successfully in the sports of agility and obedience.

All dogs, of whatever size, should have at least basic obedience training. Such training sets boundaries for acceptable behaviour and will instil respect for the owner, make for a pleasant household companion and provide nourishment for that smart brain. The Shih Tzu is a very intelligent dog, willing to please and thus not difficult to train if positive methods, which depend on kindness, firmness and consistency are employed. Being a proud and sensitive breed any harsh training methods will have negative results. Either his stubbornness will come to the fore or he may become fearful that any action will displease his handler and will therefore shut-down. Training should be made fun and motivational with ample praise and rewards for good efforts or a job well done. Socialization to accustom the dog from puppyhood to various people, places, other dogs, novel sights and sounds is essential to prevent any tendency to shyness or aggression developing and to ensure that the puppy matures into a confident, friendly and well-mannered adult.

Some photographs of the Shih Tzu... 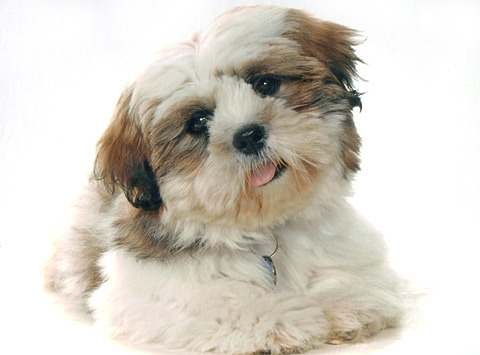 This is a photo of my little Shih Tzu, Oscar. We had the photo taken for a competition. 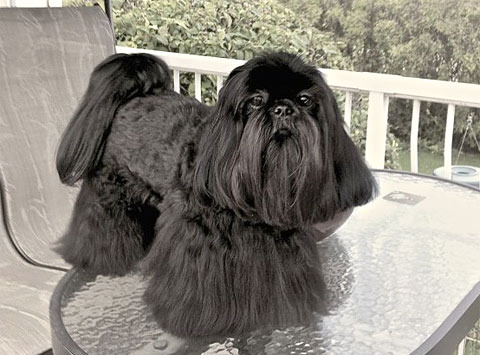 Connor, owned by Joyce in Canada

I got Connor from a show breeder in Canada. Both his mom and dad are champions but I chose to trial him in Obedience, Rally Obedience and CARO (Canadian Association of Rally Obedience) which is for all dogs purebred or mixes. He has titles in all. He got his CGN (Canine Good Neighbor) title at seven months. Above all tho he is a treasured pet! For more info and photos, see Connor's thread in our forum. 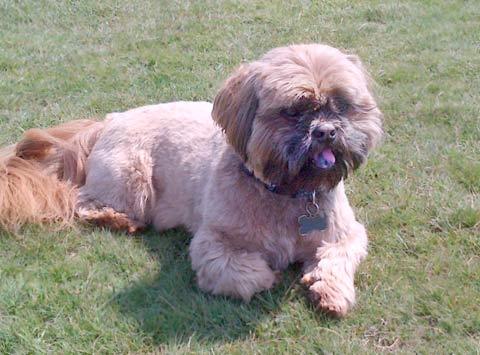 Long, dense, may have slight wave

If you have any suggestions or if you think you’ve spotted an error, please let us know in our Shih Tzu forum.