The Tibetan Spaniel is also known by the names: Simkhyi, Tibbie.

The Tibetan Spaniel originated in the Himalayan mountains of Tibet. The exact ancestry is somewhat obscure as it was the custom for small dogs to be exchanged as diplomatic gifts between China and Tibet and whether the Tibetan Spaniel was the ancestor of the Pekinese or vice versa is unknown. It is also suggested that the Pug and Japanese Chin contributed to the development of the breed. Whatever the truth of the matter it is an ancient breed which was valued by the monks of Tibet for over 2000 years. They were primarily companions, bed warmers and watchdogs taking their place high on the monastery walls to warn the Mastiff guard dogs and the monks of strangers approaching in the distance. Legend has it that they were used to turn prayer wheels by means of a small treadmill but this remains unverified. Tibbies, as they are affectionately known, are Spaniels in name only. They are not genetically related to Spaniels and there is no record of them being used for hunting. The misnomer may be traced to the ladies of the European and Oriental courts who called all small companion/comforter dogs “epagneul “ (spaniel). The fact that Tibetan Spaniel bitches have only one oestrus per year is taken by some as evidence of the breed’s closeness to primitive canines. The breed was introduced into Britain in the 1890s but did not become established until the 1940s.

The Tibetan Spaniel is a charming small dog both in nature and appearance. He is very devoted to his family and delights to be close by and to be included as a real, and important, member of the family. He thrives on human companionship and is therefore not a dog suited to a lonely life outside with minimal contact. Although he is rather independent he is very sensitive to moods and will quickly pick up and react with distress to arguments and tension. The somewhat haughty expression belies the gayness in his heart and the enthusiasm he shows for romping and playing with his people. This is a dog that enjoys life to the full whatever may come his way - the best chair in the house or chasing real or imagines rabbits. Bred for hundreds of years as a watchdog he tends to be aloof with strangers and will treat them with a degree of suspicion until he is certain that they are welcome visitors. His ancestry as a lookout on the monastery walls is responsible for the idiosyncrasy of climbing as high as possible in order to keep watch over his territory. He will chose the highest vantage point possible and will bark vigorously to alert to any approaching strangers, human or animal and is quite fearless when the need arises. As with all intelligent, self-confident dogs who think they may know better than their owner the Tibbie needs an equally confident owner to provide leadership and to set boundaries of acceptable behaviour.

This is an energetic breed enjoying play and needing a couple of brisk walks a day. Walking will keep him in trim and will provide mental stimulation. He has very keen sight, acute hearing and a good nose and he loves to explore so off-lead exercise, unless in a secure area, is unwise as he may run off on an expedition and become lost.

This is not the easiest of breeds to train but they should be given at least basic obedience training which will instil respect for the handler and lay the foundations of good manners. The Tibetan Spaniel is very intelligent and, consequently, easily bored by repetitive exercises, Training should be carried out in short sessions and be made as interesting and rewarding as possible. Only positive methods should be used. Harsh physical or verbal corrections will achieve only mistrust, confusion, and a depressed little dog. It is very important that socialization should be commenced at an early age. This will accustom the dog to novel sights, sounds and people and will help to ensure that he does not become over-protective, aggressive or nervous.

Some photographs of the Tibetan Spaniel... 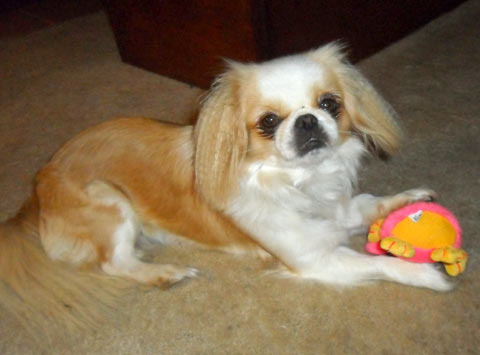 Chloe is a happy go lucky girl who loves the whole world! She's bossy with a mind of her own and won't do anything unless she understands the reason why! She's also a born comic and an escape artist par excellence but I wouldn't be without her for all the world. 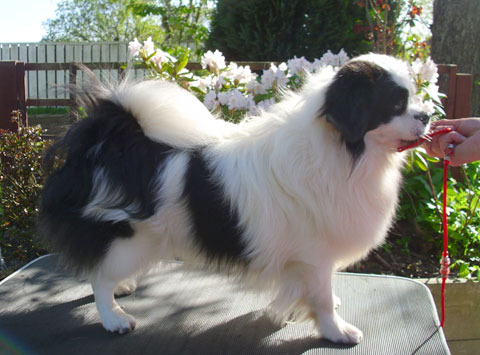 All colours and mixtures of colours

If you have any suggestions or if you think you’ve spotted an error, please let us know in our Tibetan Spaniel forum.