The Tibetan Terrier is also known by the names: Tsang Apso, Dokhi Apso.

Tibetan Terriers originated high in the Himalayan Mountains in the remote country of Tibet. There they have been bred for hundred of years to serve as companions, guards and herders of livestock. They were highly valued by the monks of Tibet not only for practical reasons but also as symbols of good fortune. For this reason the dogs were never sold only given as gifts to esteemed visitors as the selling of luck could tempt fate and bring misfortune to the seller. In the early 20th century Dr. A. Greig was presented with a TT in gratitude for her treatment of a sick Tibetan and, after obtaining a few more, she returned to Britain with them in the 1920s. Looking rather like a small Old English Sheepdog the Tibetan Terrier was developed to withstand the rugged terrain and harsh climatic conditions of its native land. The thick double coat provides protection from extremes of temperature and the unique round flat feet act like snowshoes to enable the dog to travel across deep snow. The appendage Terrier is misleading as they are not true terriers and possess no terrier blood or traits. It is believed that early travellers from the West bestowed the name on them due solely to their appearance.

The Tibetan Terrier is a loyal and devoted companion with a happy, out-going personality and the ability to adapt himself to almost any circumstances so long as he has the company of his humans. His faithfulness and desire to be with the family mean that, despite his physical ability to withstand an outside life, he is definitely an indoor dog and one to be included in as many activities as possible. If consigned to a lonely outdoor existence his lovely zest for life will fail to flourish and his naturally happy soul will wither. He is always alert and reactive to his surrounding but, although he has a strongly developed guarding instinct, he will not bark unnecessarily. He can be somewhat aloof with strangers and will not indiscriminately show or seek affection. With his family he is both playful and gentle being quite tolerant of children and, if adequately socialized, enjoying the company of other dogs. He is a very intelligent dog with a sense of his own importance and thus he requires an owner prepared to provide firm and consistent guidance as to what is acceptable behaviour. If such leadership is lacking the owner may soon find that the dog has quickly taken the advantage and learned how to train him/her.

The Tibetan Terrier is a sturdy robust dog and should have regular brisk walks and play sessions in order to keep him both physically trim and mentally stimulated. Delighting to be in the company of family he is a good companion for activities such as hiking and camping. His athleticism and enthusiasm for tackling tasks make him suited to the sport of agility and his ability to think and problem solve means that he can do well in advanced obedience.

Basic obedience training is necessary in order to produce a pleasant family companion and a dog who is not a nuisance to the public. The Tibetan Terrier is not difficult to train. His intelligence and willingness to work and to please mean that once he has understood what is required he will carry out commands happily and efficiently. That intelligence may however work against training as he can become quickly bored with repetetive exercises in which he can discern no point. Sessions should be kept short, fun and interesting. All training should be based on positive methods as harsh handling will damage the relationship between dog and owner resulting, at best, in mistrust and confusion and at worst in a dog whose spirit is broken. Socialization, which is the process of introducing the puppy to as many of the sights, sounds, people, animals and situations that he may encounter during his life, is most important. This will provide him with the skills necessary to cope in the human world and will help to ensure that he matures into a calm, confident, temperamentally stable adult.

Some photographs of the Tibetan Terrier...

Tilly playing in the snow! 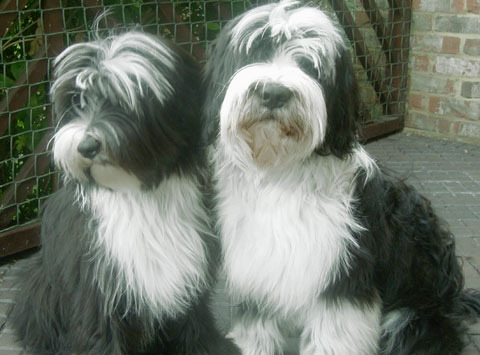 Flash and Rucksack, owned by Jenny in Weybridge, UK

Flash (L) and Rucksack are littermates who are the best of friends. Both are real comedians and live life to the full. 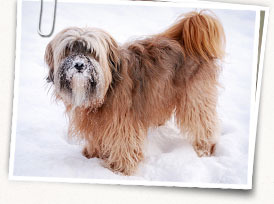 Any colour except chocolate or liver

If you have any suggestions or if you think you’ve spotted an error, please let us know in our Tibetan Terrier forum.