The Yorkshire Terrier is also known by the names: Yorkie.

This is a comparatively recent breed which was developed in Yorkshire in the late 18th early 19th century by working men who wanted a first class ratter of a convenient, easily portable size. There are no early breeding records therefore it is not possible to identify exactly which breeds contributed to the evolution of the Yorkshire Terrier. It would seem safe to say that the Yorkie was not the result of random mesalliances but that the crosses which were used were carefully thought out. Suggestions as to the breeds used include the now extinct Clydesdale, English Black and Tan, Paisley, and Waterside Terriers, plus the Skye, Manchester, and Dandie Dinmont Terriers and the Maltese. The early Yorkshire Terrier was larger than today’s specimens but the fashion for tiny dogs encouraged selective breeding to diminish size. The Yorkie continues to be one of the most popular of the Toy dogs both as a companion and an eye-catching show dog. The breed was first recognized by the Kennel Club in 1886.

As tiny and glamorous as he may be the Yorkshire Terrier retains many of the traits of his working terrier ancestors. He is bold, game, tenacious, can be stubborn and, despite years of being bred solely as a companion, he will hunt and courageously tackle large rodents. He is also a most loyal and unstintingly affectionate fellow who needs a great deal of human company and attention. Unfortunately, because of his appealing appearance, his natural air of importance and his diminutive stature, he tends to be subjected to pampering and spoiling - treatment which can lead to exhibitions of bossiness, jealousy, over-protectiveness and other behavioural problems. He is as much of a dog as is a Rottweiler and failure to provide him with sensible rules by which to live does him a great disservice. Despite his dainty looks he is quite hardy and extremely energetic loving to play games and investigate whatever may be going on. This adventurous side of his nature, coupled with an independent streak, make it essential that gardens are securely fenced as he will not think twice about getting out to follow whatever has aroused his curiosity. He is an effective watchdog and will raise a long and loud alarm should anyone or anything approach his territory. The Yorkie can develop into a nuisance barker so it is wise to educate him from an early age as to when barking is inappropriate. He is generally quite good with other dogs but his assertiveness can occasionally get him into trouble and, in an encounter, he will resolutely stand his ground against all odds - the aphorism “discretion is the better part of valour” being quite foreign to his nature. For individuals or families with older children who are seeking a small dog full of vim and vigour the spirited, loving and loveable Yorkshire Terrier may fit the bill.

This is a naturally active breed and the exercise needs of the Yorkie will, in large part, be filled by games and his general busyness around the house and garden. Daily walks are also necessary as he takes great pleasure in getting out and about and these excursions will keep him mentally alert as well as physically fit. Off-lead exercise is not recommended unless in a safe area as his hunting instincts may triggered by the sound of a mouse or other small animal and he could run off and into trouble. He is sensitive to the cold so should wear a coat in inclement weather.

In order that he should be an agreeable member of the household and acceptable to the wider community the Yorkshire Terrier’s basic obedience training should start as soon as possible. He is an intelligent dog who learns quickly and is responsive to a loved and respected owner. All training should be carried out using positive methods which reward his achievements with treats and praise. Rough handling and harsh verbal corrections will, at best, confuse him and slow the learning process. At worst they will break his spirit and his heart. Socialization also should commence in early puppyhood. By introducing the pup to a wide variety of people, places, noises, other animals, he will grow to be a confident, out-going, stable adult who is a delight to know.

Some photographs of the Yorkshire Terrier... 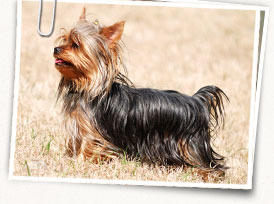 If you have any suggestions or if you think you’ve spotted an error, please let us know in our Yorkshire Terrier forum.