The Poodle (Toy) is also known by the names: Pudle.

Although the Poodle is thought of as a French breed it is by no means certain that it originated in that country. Dogs of the Poodle type have existed in Western Europe for hundreds of years with references in art and literature dating back to the 13th century. Breed historians tend to agree that the dog probably originated in Germany from the German water spaniel and type was set and standardized in France. The name ‘Poodle’ almost certainly comes from the German ‘Pudel’ (water dog) or ‘pudelin’ (to splash). In France the breed is known as the Caniche (duck dog) which is descriptive of its purpose - the retrieval of game birds from water. The Toy Poodle was initially developed from small Miniature Poodles and, although some of the early Toys were unprepossessing specimens, careful breeding has succeeded in producing a tiny dog with the correct appearance and all the spirit and fortitude of his larger relatives. The distinctive ‘lion’ clip which is associated with show Poodles was a practical measure to reduce water resistance and to protect and keep warm the chest, joints, and kidneys of naturally long-haired dogs working in cold water. The coloured hair ribbons were also purely functional as they enabled owners to identify their own dogs when working with others. The Poodle’s great intelligence, his ability to learn quickly and his enjoyment in performing saw him become a star of circus, screen, and stage. The first Poodle was registered with the Kennel Club in 1874.

Bred purely as a companion dog the Toy Poodle is a deservedly popular family pet. He combines love of family and home with a light-hearted outlook on life and a most elegant appearance. As with the Miniature, the Toy is rather more excitable and extroverted than the Standard. His vivacious nature and curiosity about everything that is going on means that any triviality is worth investigating and perhaps commenting on. He is a good watchdog with a strong sense of territory alerting to visitors or any perceived threat with a fierce bark and attitude which can be quite astonishing in such a diminutive dog. One of the major characteristics of the Poodle is his outstanding intelligence. To satisfy his bright, enquiring mind mental exercise is essential. Boredom is his enemy and if confined to a backyard without interaction with his family he will become depressed and miserable and will invent ways of amusing himself that may result in destructiveness or other nuisance behaviour. He hates solitude and needs human company. If he is included in as many family activities as possible and given mentally stimulating exercises and allowed to rest and relax within the family circle problematic behaviour is unlikely to occur. He is also an extremely sensitive dog and can become distressed by loud voices and tensions within the family. This sensitivity is combined with such intuition and awareness of human body language that he may seem to know what his owner wants before any signal or command has been given. For those prepared to deal with the necessary daily brushing and monthly clipping and the provision of sufficient mental and physical exercise the Toy Poodle will prove to be a most delightful and entertaining companion.

For all his stylishness and grace the Poodle is a robust dog who retains his sporting instincts and stamina. He revels in exercise and regular brisk daily walks and the opportunity to run and romp in a secure area will keep him physically fit and help to keep him mentally alert. His athletic ability suits him to the sport of agility and like most Poodles, true to his heritage, he will enjoy a swim. He excels at any sport or game that involves him using his mind and can be trained to do almost anything that is within his physical capabilities.

The Poodle is perhaps one of the easiest dogs to train provided that the method used is based on kindness, fairness, firmness and consistency with lavish praise, and perhaps a treat, for a job well done. Harsh verbal or physical methods will destroy both his responsiveness and his trust causing him to close in on himself and even to stop trying for fear of making a mistake. His willingness to learn and his eagerness to please mean that he will master new tasks quickly so the owner needs to be one step ahead in order to keep training fun and stimulating. Many Poodles compete very successfully in advanced obedience trials. Socialization should be extensive and on-going starting at a young age. This involves introducing the puppy to as many situations, places, animals and people of various kinds as possible. Adequate socialization will help to overcome any tendency to shyness, aggression, or nervousness and will ensure that the puppy develops into a confident, friendly and well-mannered adult.

Some photographs of the Poodle (Toy)... 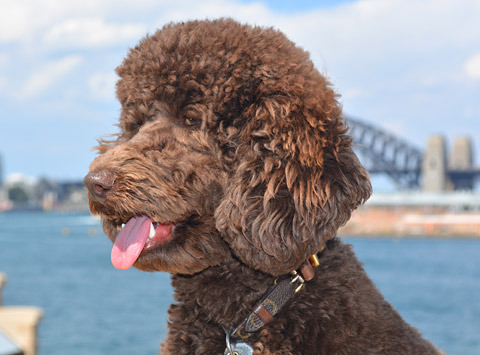 Billie is our gorgeous chocolate Poodle (11 months old in this photo) – he is very friendly, loves a pat from everyone and I take him to work – he is happy to sit under my office desk – he is sooo loving and loves his family! 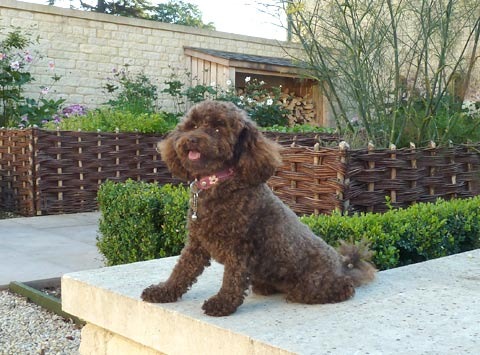 Fifi is the most adorable, loving and loved dog imaginable. So true to her breed she is very playful, greets all her family and friends, loves a cuddle, content to be groomed, rarely barks and is too clever by half.

If you have any suggestions or if you think you’ve spotted an error, please let us know in our Poodle (Toy) forum.